Ann O’Hanlon (1908-1998) was recognized as the artist in her family a few years after her birth on June 21, 1908, in Ashland, Kentucky. Her younger sister, Myra Dee, is fond of telling stories about the preferential treatment this talent afforded Ann: “’Now, Myra Dee, mother used to say, ‘You know Ann Louise has to protect her hands so you need to do the dishes.’” The oldest of five, Ann helped to raise her younger siblings while her mother became somewhat of a local celebrity for the “beaten biscuits” she used to make and sell in order to help make ends meet.

From these humble beginnings, Ann Louise Rice went on to receive her Bachelor of Art degree in 1932 from the University of Kentucky, followed by graduate work at the California School of Fine Arts, now known as the San Francisco Art Institute. There she met her future husband, Dick O’Hanlon.

At this time Dick was an apprentice to Diego Rivera and was assisting him on the creation of the large fresco which stands in the Art Institute to this day. Four years later Dick and Ann returned to Kentucky to paint her landmark 38 x 11 foot fresco in Memorial Hall at the University. Each day Dick would lay out fresh plaster for Ann while she prepared the pigments for the area she would be painting. This fresco, the largest painted by a woman in the United States, captures the pictorial and controversial history of Kentucky, and is still considered one of the most important works of art in the state.

IMPORTANT! Follow this link to a July 6, 2020 New York Times article about the controversy surrounding the fresco / mural.

“Embattled: The Story of the O’Hanlon Fresco.” Article by Abby Wasserman in the Front Porch Republic, October, 2020

Our understanding from various correspondence with Jay Blanton at the University of Kentucky, is that Ann O’Hanlon’s 1934 mural will not be destroyed but perhaps moved. As far as we know, the final decisions have not been made, and the University is looking at this mural in context of how facilities, art and education will work together to create a more understanding and racially conscious campus community.

We have asked for assurances from the University of Kentucky to recognize the significance of Ann O’Hanlon’s work, and as stewards, do all that is necessary to ensure its preservation either in its current locale or in another area. We have also asked the University to entertain the notion of using Ann’s work as a catalyst for learning, education and understanding in regards to furthering deeper discussions of diversity, equity and inclusion while recognizing and respecting the difficult and controversial history of race in America. We are hopeful that the University will choose a path that can help elevate open discourse and dialog about the history of art and culture in America without destruction and censorship. 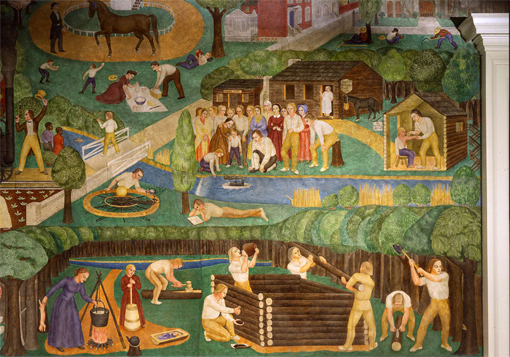 After completion of the fresco in 1936, Ann and Dick ventured east, where they spent time in New York City and at the Barnes Foundation in Philadelphia. In 1938 the O’Hanlons returned to the Bay Area, and in 1942, along with a group of family members and friends, bought the old Freitas dairy farm at 616 Throckmorton Avenue, where the O’Hanlon Center still stands today.

As Dick and Ann began to convert the old barn into living and studio space, they attracted neighboring artists and friends, and with their help, in 1948 they raised the walls of Dick’s new sculpture studio, which now houses the O’Hanlon Gallery.

Ann founded the art department at Dominican College in San Rafael, CA. Then on retirement began her own Perception Workshops at 616 Throckmorton. These were a phenomenon. She enlightened many people. Her message of be creative without dependance on technique, pay attention to what you SEE, and accept the mark you make, made a lot of sense to participants who simply ran with with the wide-open possibilities of her philosophy.

Throughout her life, as well as being a “facilitator” and mentor, Ann also continued to make art and visually explore.

On her death she left the Art Center to its membership. Many thanks to Jane Peters, Assoc. Prof., Art History, University of Kentucky for providing the Kentucky Mural photos. 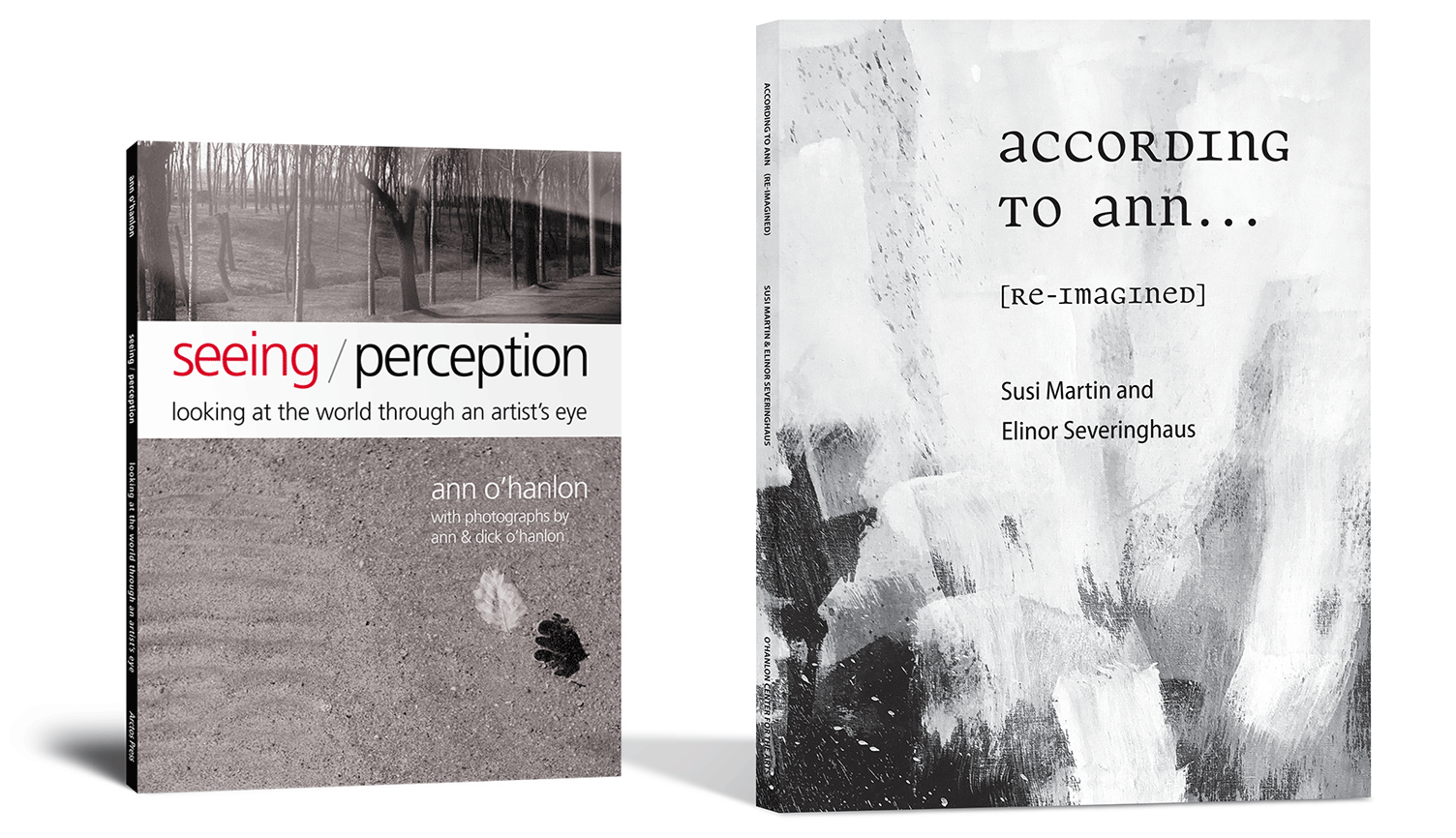 Ann authored several publications during her career. The first, According to Ann, is a compilation of verbatim notes taken by Suzi Martin and Elinor Severinghaus during Ann’s Perception Workshops. This book has recently been “reimagined” using many images from past and present OHCA members.

The second was published posthumously by Arctos Press in 2001 and is called seeing/perception: looking at the world through an artist’s eye. The book was edited by Suzi Martin and Cornelia Wattley, and designed by Jeremy Thornton. It contains many photographs by both Ann and Dick, and a poem by Ann’s nephew, poet, Wendell Berry.

“I wish to make this bit of musing a foreword to this manuscript.

For over forty years I have been learning about the creative spark in people and in myself, first through the job of teaching (for the first half-a-dozen years or so), then through the privilege of teaching (for the next half-a-dozen years or so), and then the suspicion dawned on me that I should not be teaching at all, but should be listening, and asking, and exposing, and perhaps nudging (occasionally), and above all, perceiving objectively (forgetting my own subjective preferences) the works of people and the world of nature.

…It dawned on me that the major obstruction to comprehension on the part of (students)…was the fact that they did not know how to see, how to look. It was as simple as that. So I invented an elective non-credit course called Orientation to Visual Experience, and that was the formal beginning of the rest that has been unfolding to the present…Gradually it became very obvious that the ability to perceive—totally—required more than just reading or looking or talking or meditation. It required DOING.” – Ann O’Hanlon

Seeing/Perception
Looking at the World through an Artist’s Eye

by Ann O’Hanlon with photos by Ann & Dick O’Hanlon 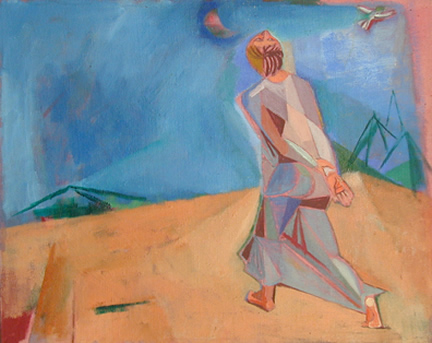 – seeing, and doing, and then seeing again

the receptive contemplation of what one has done. 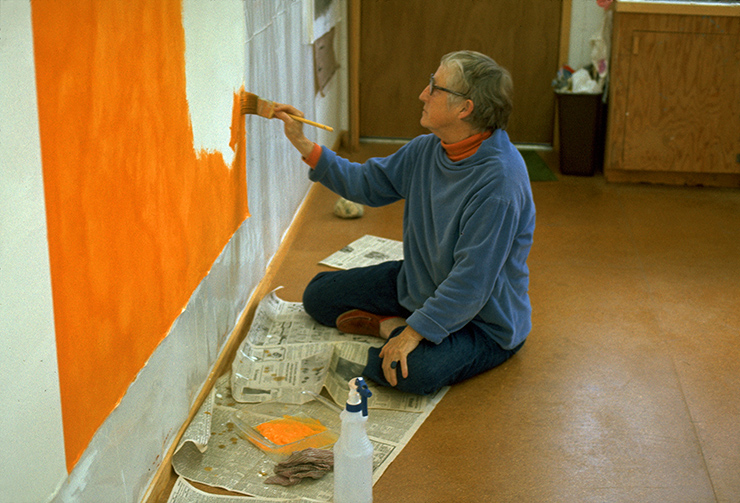